By God’s grace, the mobile eye clinic mission was accomplished. The team of 6 eye care professionals had screened over 2000 people and completed 208 cataract and trachoma surgeries. A cataract surgeon and eye nurse stayed behind for 5 days to continue surgeries and to do post-operation exams. We also dispensed many hundreds of pairs of reading glasses in both the UN camps at Juba and at Malakal—for example, over a two day period we gave out 400 glasses. 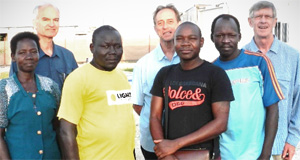 Your prayers addressed obstacles. I discovered that Satan loves red tape. Two Ethiopian eye nurses were refused visas by S. Sudanese authorities, which handicapped us. We nearly were unable to fly from Juba north to Malakal. As we complied with getting weights and descriptions of our 14 or so boxes and suitcases, the flight closed to more weight. The only alternative was to charter a Cessna Caravan, owned by the World Food Program (WFP), to carry the 1550 lbs. gear and meds, and to book another 3 seats on a scheduled jet flight to Malakal, since the Caravan couldn’t carry both gear and team. These arrangements added almost $5,000 to the cost of flying about 80 minutes to our destination.clinic mission was accomplished. As we departed S. Sudan, the team of 6 eye care professionals had screened about 1700 people and completed 165 cataract and trachoma surgeries. A cataract surgeon and eye nurse stayed behind for 5 days to continue surgeries and to do post-operation exams, so the totals aren’t complete. We also dispensed many hundreds of pairs of reading glasses in both the UN camps at Juba and at Malakal—for example, over a two day period we gave out 400 glasses.

At the airport next day, the head of security required a new form, without which, we were coldly informed, we would not fly two hours later, although our charter flight was probably already heading in our direction from Rumbek, S. Sudan. After much prayer and a few phone calls, we were able to fly without the form.

Perhaps the biggest obstacle was the heat. I could not get a definite reading, but it ranged around 105-109 or so, based upon readings seen when we returned to Juba. A British soldier working with the UN just returned from Kodok, S. Sudan, 40 miles northeast, and said the temperature hit 50 C, which equates to 122 F. On occasion the generator at the International Medical Corps operating room died for maybe 20-30 minutes, from overload, trying to keep the AC going.

However, we had some fun, found the gym, enjoyed very good food in the UN cafeteria at Malakal, had AC in our modular pod rooms, Starbucks instant coffee, and great co-workers. Chaplains that RMNI now supports at Malakal worked with about 17 churches within the camp, and the process of screening went smoothly. Seeing the elderly being led by a stick between them and a child in front of them reminded me of what New Testament times must have been like. We asked local evangelists to preach to the people as they waited to be screened, so that they might come to the Light of the world. We usually had to compel the eye team to stop operating so that they could eat, and even then, they asked us to bring food to them more than once. We unexpectedly spent a day in the city of Malakal, near the UN camp. Someone there said that our coming had to be from God, as who else would go there and provide free care, if God was not behind it? I believe that He was, as were you.

Together, for the Name, 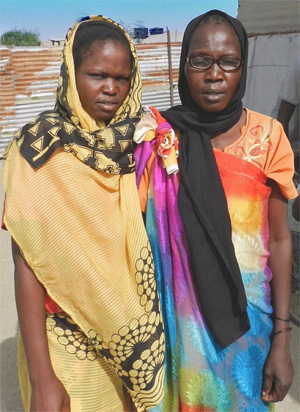 The lady on the right, accompanied by her daughter, had cataract surgery, was treated for trachoma, and received reading glasses. 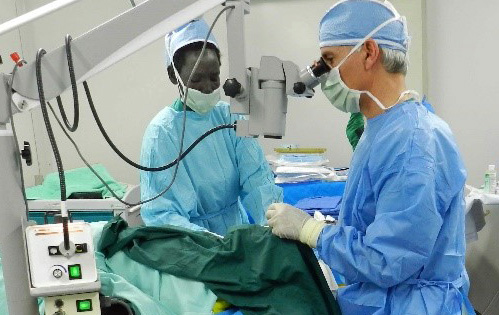